I have a mostly-love-but-kinda-hate relationship with Fantasy Flight Games. One on hand, they make a lot of really nice, really fun games, including some Casa Wedel favorites like the Warhammer 40k game Relic

. On the other hand, they sell them dearly. And a lot of the games seem to suffer from some degree of component bloat: everything runs on craploads of cards and mountains of special dice, and sometimes the starter sets are semi-horked because they don’t include quite enough bits for the game to play cleanly. I always get the feeling that they’re trying to coerce me into buying an extra pack of their special dice at an insane markup.

But on the gripping hand, when you open the box, all the stuff is nice. Verging on luxurious. You may spend a lot on the box, but when you open it, you will know where your money went.

And on the I-don’t-even-know-which-hand-to-call-this-cuz-Moties-only-go-to-three-and-this-is-another-positive-point-anyway hand, most FF games have at least one mechanic that is innovative enough that I want to hack it and apply it to other games. From Relic, it’s the cardboard dials to track your character’s stats. Man, I would love to have those for so many other games that I play.

Anyway, the hate part of this love-hate thing is why I put off getting into the X-Wing Miniatures Game

for so long. The starter set has a retail price of $40, street price around $27, for which you get all of…three ships. Two basic TIE fighters and one lonely X-Wing. Extra ships retail at $15 apiece, street price of $10-12. So if you want a 3-on-2 battle, you’re looking at about $50. Which I realize is small potatoes in the bigger world of miniatures games like 40k, where apparently you need to invest a few hundred bucks just to get started. Aaand you can cheat this a bit: the X-Wing starter box has several pilot cards for each ship, so if you have other minis to stand in, you can set them on top of the ship tokens and push them around just like the official minis. We’ve done this once and it works okay, but the official minis are so nice – miles beyond anything done at this scale for Star Wars before – that a good portion of enjoyment of the game is aesthetic satisfaction. The ships don’t look like stand-ins for the movie ships, they look like they flew right off the screen and onto the table. And stand-in models rather ruin that effect. (Curse you, Fantasy Flight, for making me want your expensive stuff so badly! I must punish you with a steady stream of greenbacks!)

So I circled around this game for a long time (much as I’ve been circling around FF’s Star Wars RPG), until a tentacle of Amazon credit pulled me into the Sarlacc Pit of X-Wing ownership. I had enough credit to get the starter box and one expansion, and I chose the Y-Wing for historical and sentimental reasons. It is a testament to the addictiveness of the game that when London got his allowance the very next weekend, we went out and bought the TIE Defender

expansions (he doesn’t get that much allowance, but we pooled his dough with my available fun money). Here’s an in-progress shot from the game we played this evening, showing the TIE Defender at bottom center and the E-Wing on the right:

(London won, BTW. First his TIE Defender ionized Luke’s X-Wing, allowing the TIEs to shoot it to bits, and then the three ships had little trouble dispatching my E-Wing, despite serious damage to both of the standard TIEs.)

As the post title implies, the game is crazy fun. It plays fast – we’ve had some games run a bit over an hour, but nothing like the all-afternoon commitment required for Relic or BattleTech. It’s intuitive to pick up. And the movement mechanic is just brilliant. Every ship gets a little maneuver dial, specific to that kind of ship, and during the planning phase of a round, the players secretly set the maneuver dials for all of their ships. (The maneuver dials are the face-down discs next to the ships in the photo above.) So a huge part of the game is trying to guess where your opponent’s ships are going to end up, so you can get your own ships squarely on target. You’ll cheer when a prescient move gets your best ship on the enemy ace’s six, and groan when an unlucky guess dumps your fighter into a shooting gallery.

That maneuver mechanic is what I want to port from X-Wing to every other miniature-based wargame that I play. A huge part of why BattleTech takes so long to play is the paralysis-by-analysis that accompanies sequential movement for each ‘Mech. If all of the moves were planned and revealed simultaneously, the agonizing chain of move, react, react-to-that, react-to-that, etc., etc., that eats up most of the gametime would be nipped in the bud. Naturally this would require rules for what to do when units bump into each other, which X-Wing has, and which could be DIYed for BattleTech pretty easily. For fast-movers and jump-capable ‘Mechs, the number of possible legal moves is too large to simulate using a dial, but everyone could write down their ‘Mechs’ moves in secret and then all reveal in sequence. Heck, that’s what London and I did in X-Wing when we used the off-brand minis, and it worked fine. I guess death-from-aboves would be almost impossible, but heck, they’re hard enough anyway to only appeal to the desperate or reckless.

The upshot is that if you’re remotely interested in Star Wars and tabletop games, you should give this a shot. I’m glad I did.

These last two photos are mostly for my future reference: the squads we fielded for tonight’s game. With the three Imperial ships we have right now, the best possible Imperial squad we can field costs 83 points:

And here’s a matching 83-point Rebel squad that does not include the Y-Wing: 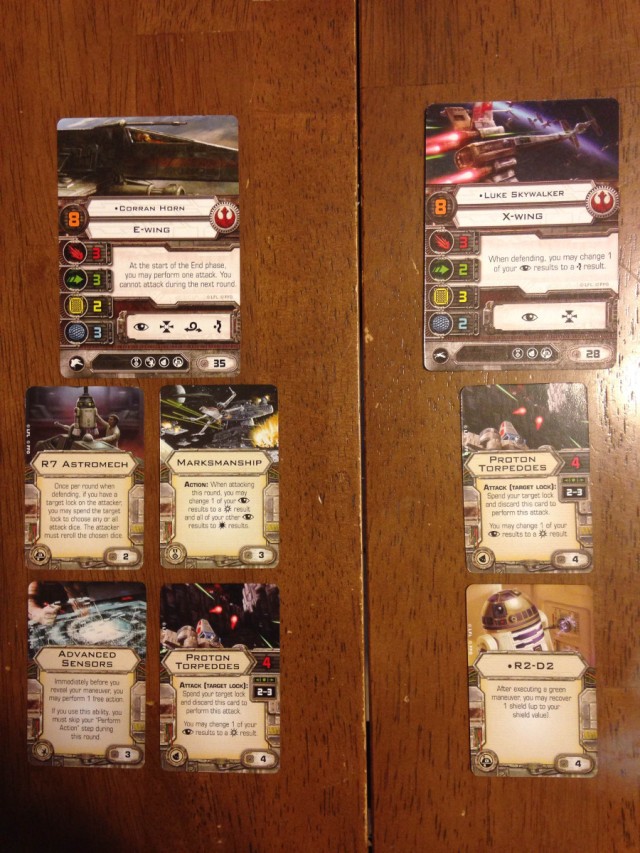 It’s also possible to make an 83-point squad that does include the Y-Wing, but with low-skill pilots on all three ships and very few upgrades. However, the Y-Wing’s turret-mounted ion cannon is so good that it kind of unbalances the game, unless the Imperials have something to match, and ours don’t yet. I suppose the next thing for us to try is the three Rebel ships versus the three Imperials, minus the ion turret for the Y-Wing. I’ll keep you posted.