I finally, finally published something for Star Wars: the Roleplaying Game

The cover of the Star Wars Adventurer’s Journal, Issue 1.

Today sees the completion of a quest 25 years in the making for me–and if you just want the file, it’s at the bottom of the post. But first, some backstory. In the mid-90s, West End Games published a quarterly supplement for Star Wars: the Roleplaying Game called the Star Wars Adventure Journal. Each issue had fiction, adventures, settings, ships, NPCs, and so on, just loads of playable content for your Star Wars game. There were 15 or so issues between 1994 and 1997, and I bought them religiously for the first two years, and intermittently after that.

Lovely pen-and-ink work by Allen Nunis, who did a lot of the illustrations for the early WEG Star Wars RPG publications.

The coolest thing about the Adventure Journal is that fans could submit material for it. In fact, although it was published and edited by WEG, most of the content of each issue came from fans. And holy crap did I want to be published in the Adventure Journal. Not just anyone could submit, you had to have published something, somewhere first. Even letters to the editor in a newspaper would suffice, so I wrote one for the Oklahoma Daily, the OU campus newspaper. I sent a copy of my newspaper clipping with my forms and a printout of my adventure to West End Games, and I was very happy and proud of myself.

Another Nunis drawing, of a Dark Side sorceror consulting with Darth Vader. This one was from the Gamemaster Screen, I believe.

WEG rejected my adventure. The rejection letter was polite and constructive, and even at the time I knew they had made the right call: there was a plot hole in the middle of the adventure that was big enough to fly a spaceship through (in-universe, that was literally true). I couldn’t figure a way around it, though, and a few months later I got married and started doing actual research in paleontology and those two things diverted my energy into other, more productive channels. Publishing a Star Wars adventure became my dream deferred, at first temporarily, then more permanently: in 1997 WEG lost the license for Star Wars, a year later they went bankrupt, and that was the end of the Adventure Journal.

A third and final Nunis piece, this one evocative of the early Star Wars newspaper comic strips, which were full of crazy alien landscapes reminiscent of the old EC sci-fi and horror comics.

Fast forward to last year, when I was downloading scans of the WEG Star Wars books from the D6 Holocron (which you should absolutely visit and pronto if you dig Star Wars stuff). On the page with the scans of the old Adventure Journal I found something I’d never seen before: the similarly-titled Adventurer’s Journal, which had started publication in 2018. “What the actual hell?!” I said to myself, in wonder.

The Adventurer’s Journal is an entirely fan-made publication for folks (like me) who play good old WEG d6-based Star Wars. Like the old Adventure Journal, the Adventurer’s Journal publishes fiction, adventures, setting material, locations, ships, NPCs, and so on. For d6 grognards like me, it’s like West End Games was thawed out of carbonite (or, er, bankruptcy in this case) and back in action. 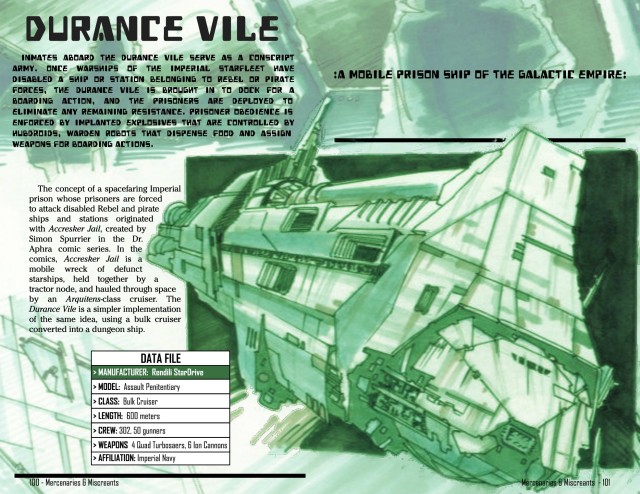 The opening spread of my article. Art by Chris Gossett, repurposed from the WEG Platt’s Starport Guide, chosen and arranged on the page by Adventurer’s Journal head editor Brian Bird.

As soon as I knew the Adventurer’s Journal existed, I knew I wanted to publish in it, and finally fulfill the goal of giving something back to the RPG that has been the gravitational center of my gaming life for the last 30 years. Over this past Christmas break I started writing stuff for the Journal in my spare time. London and I have played a lot of Star Wars in recent years, and I have notebooks of adventure notes that just need to be polished up and submitted. The first one came out today, in Adventurer’s Journal Issue 5: Mercenaries and Miscreants. It’s not an adventure but an adventure setting, an Imperial dungeon ship called the Durance Vile. I loved the Accresker Jail setting from Simon Spurrier’s run on the Star Wars: Dr. Aphra comic book, and the Durance Vile is an earlier, simpler implementation of the same idea (with full credit to my source of inspiration, as you can see from the opening spread above).

AJ Issue 5 should be up soon at the D6 Holocron, at the bottom of this page, and in the meantime you can download it at the link immediately below. I hope you have even a fraction as much fun reading and running it as I did writing it. It starts on page 100. 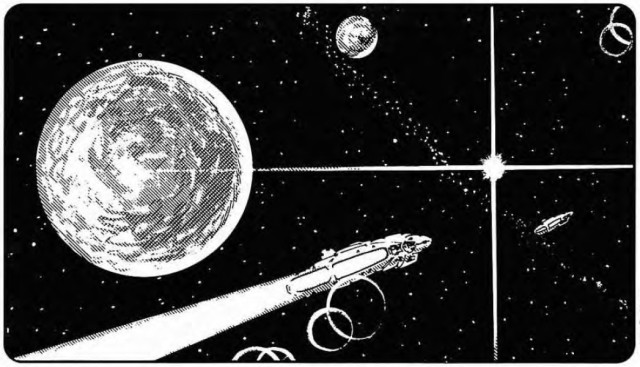 Art by John Paul Lona, from the WEG Twin Stars of Kira supplement.

The Adventurer’s Journal comes out twice a year, in May and November. I’ve already got a full-length adventure ready to submit for the November issue, and I’m going to keep writing for AJ until someone tells me to quit. At the risk of crossing universes (again), you can’t stop the signal. So stay tuned.

Parting shot: AJ sometimes repurposes old WEG art, and the illustration from the cover spread of my article was originally done by Chris Gossett for the WEG supplement Platt’s Starport Guide. It was chosen and arranged by the Adventurer’s Journal head editor, Brian Bird, and I couldn’t be happier with it. I offered to do a technical diagram of the ship, and Brian asked that I make it match the cover art, so here’s my illustration. I’m providing it in three versions: just the ship; the ship, title, and surround; and the fully labeled version from the article. I’m releasing this under the CC-BY 4.0 license, for you to do with as you see fit.

5 Responses to I finally, finally published something for Star Wars: the Roleplaying Game