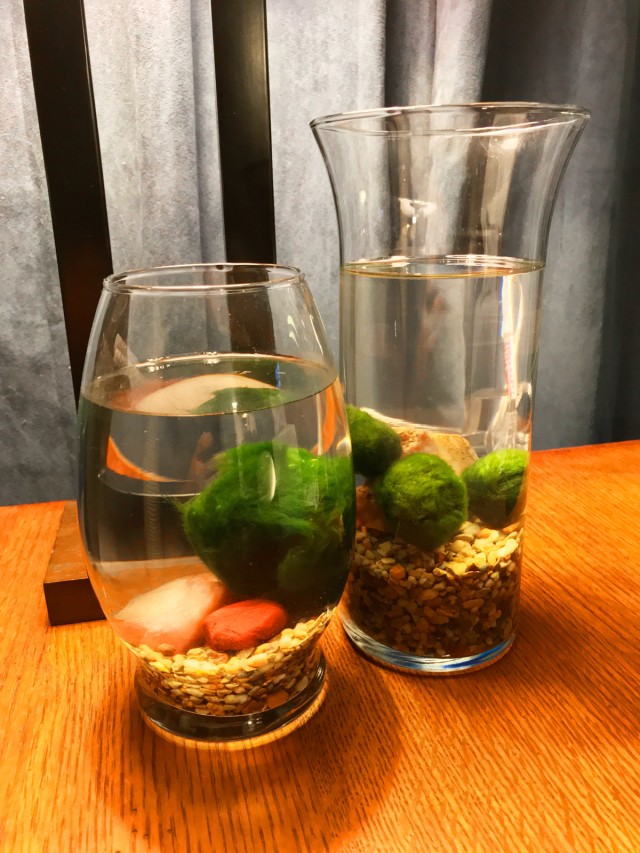 When I blogged about my aquarium three years ago, I neglected to mention one of our favorite residents–and the only one of the original gang still alive at this point: Grand Moss Tarkin. GMT is a marimo “moss ball”. Marimo balls aren’t really moss, but they are really cool, so I’m going to yap about them.

As every marimo site on the net will tell you, marimo aren’t really moss. They’re filamentous green algae, Aegagropila linnaei. If they’re not periodically rolled around, some of the algal filaments strike out on their own, and the ball form gets ragged. The above photo of Grand Moss Tarkin shows some stray filaments on the left. 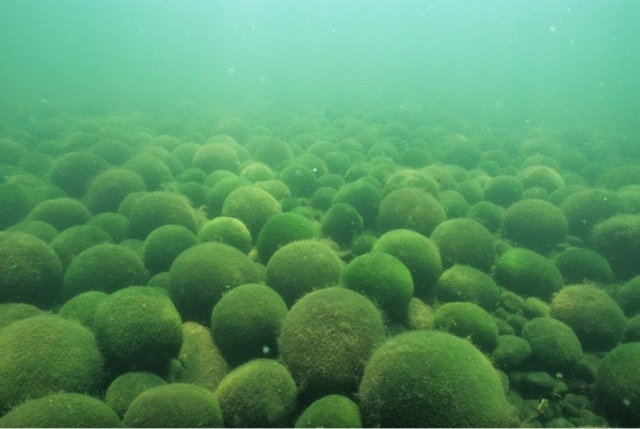 Aegagropila linnaei has three growth forms: loose filaments, a continuous carpet on submerged rocks and logs, and as a ball or marimo. Marimo form in cold, clear lakes in Japan, Russia, northern Europe, Iceland, the northern US, and Canada, where waves roll colonies of algae across smooth lake bottoms to form spheres. Japanese botanist Takiya Kawakami coined the term ‘marimo’ in 1898. ‘Mari’ is a bouncy play ball and ‘mo’ is a general term for aquatic plants.

Last weekend I transferred Grand Moss Tarkin from the aquarium to the vase shown at the top of the post, and I liked the effect so much that I decided to get more. Aquatic Arts sells marimo on Amazon, and they had good reviews so I ordered a batch of 10

. As you can tell from the above unboxing photo, they actually sent 12, and all 12 were in good condition.

To revive the marimo from the rigors of shipping, I followed the instruction sheet that Aquatic Arts put in with the order: I put the marimo in a bowl of cold water for half an hour to revive them a bit (that’s why there are ice cubes in one of my photos), then swished them in the water and gently squeezed them to clean them, and hand-rolled them a bit to get them back into nice spherical shapes.

Now they’re in various containers scattered around the house. All of the containers in this photo cost a buck apiece. The three on the left came from the dollar store down the street, and the thing on the far right is from a snow globe kit I picked up on after-holiday clearance at Target. 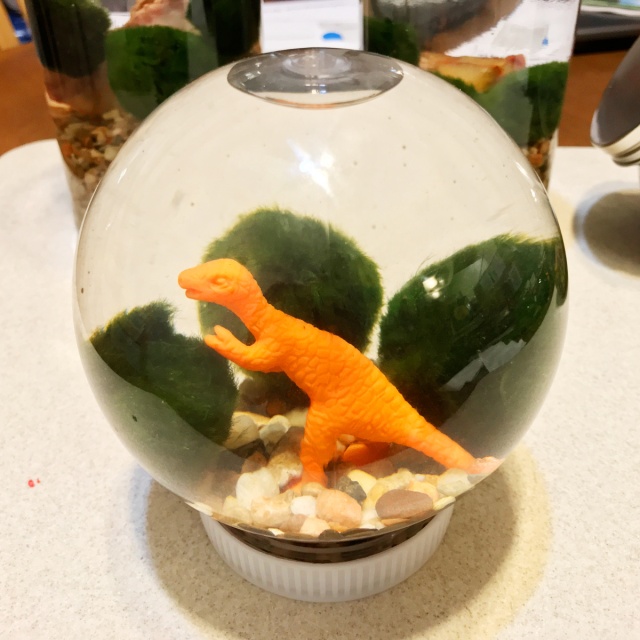 Although this looks like an ecosphere, it’s not. Like most aquarium organisms, marimo do best with regular partial water changes, which I’m planning to do every week or two. The water changes will also swap the air in the two closed containers, which should be plenty frequent. Marimo do grow but they grow slowly, only about 5mm in diameter per year even under optimum conditions. There are giant marimo from lakes in Japan that are a foot across, and given the rigors of life in the wild, some of these are suspected to be 200 years old.

If you’re interested in keeping marimo, they’re easy to find. Most aquarium shops have them–I got Grand Moss Tarkin at the local PetsMart–and they’re available at lots of places online. I can’t vouch for most of the online sellers, but Aquatic Arts came through and I will certainly order from them in the future when I want more marimo. Here are their marimo on Amazon: link.

The most comprehensive care guide that I have found is at ballsofmoss.com. The short, short version is that marimo are pretty hardy and easy to care for. Being lake-bottom organisms, they don’t require bright light or warm water. Room temperature water and ambient indoor light are enough to keep them going. If they start to flag, an overnight stay in the refrigerator and a pinch of salt should perk them up–marimo do quite well in brackish water. You can hand-roll them back into spheres when you do water changes, to mimic the wave action that would maintain their ball shapes in the wild. And…that’s about it. Marimo don’t do much, but they’re pretty, easy to care for, and scientifically interesting, and that’s a good combo for a pet or houseplant or whatever you might call these things. Recommended!

This entry was posted in aquarium, marimo. Bookmark the permalink.