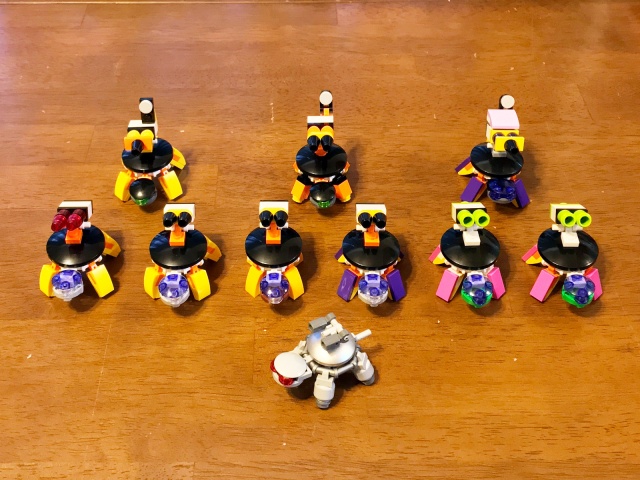 Three generations of Space Turtles. Back row: my Mobile Frame Zero turtles, minus their ECM projectors. Middle row: the six turtles that will become kits for kids I know. From left, there are two yellows with different guns, an orange, a purple, and two pinks. Front row: the Space Turtle from the Exo-Suit set, inspiration for all the rest.

To make Space Turtle kits, I need to do a few things in order:

I covered #1 and part of 2 in the last post, although I didn’t show the final versions. I used my spare time last night and tonight for 3 and 4. I’m making these for nieces and nephews and one family friend, and I’m customizing the instructions for each turtle to include the recipient’s name. That’s neither here nor there for you, so for this post I’m using versions of the instruction cards without the names. Feel free to swipe them if you find them useful. 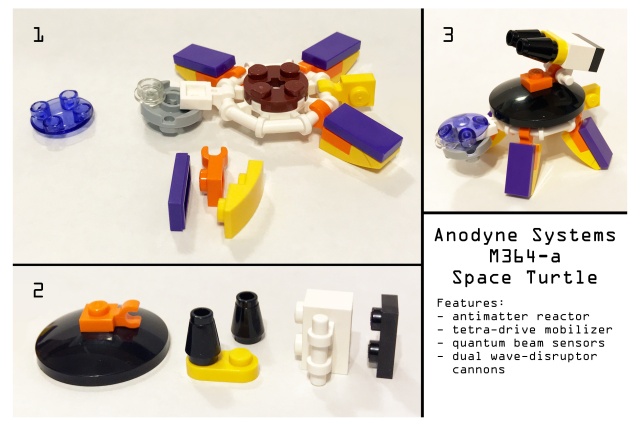 According to Peter Reid, the classic Space Turtle is the Anodyne Systems M364. My turtles aren’t classic Space Turtles – they have different heads, legs, shells, guns, and even tails. But I think they’re still recognizable as Reid-derived Space Turtles, and I wanted to pay homage while at the same time making it explicit that my turtles were variants. So I added a letter designation to the M364 for each one – the letter being the first initial of the kid who will be receiving that kit. I did two yellow turtles and two pink turtles for kids in different households – everyone under one roof gets a unique turtle – which is why there are four sets of instructions posted here instead of six. 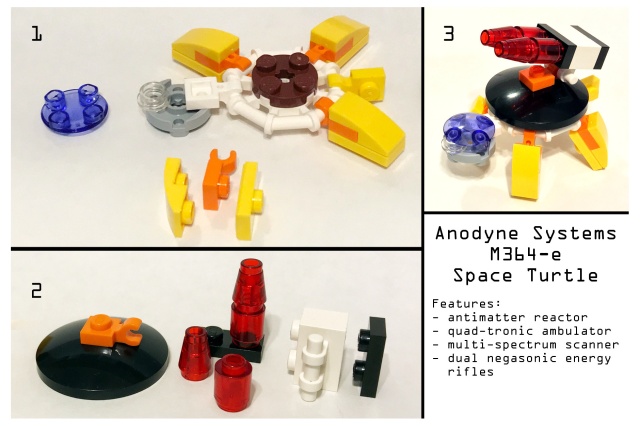 I also added some pseudoscientific gobbledygook hyping the features of each turtle. They’re all pretty much the same to look at, but I thought it would be fun to come up with pulp-sounding BS synonyms for “powerplant”, “legs”, “head”, and “gun”. And I was right – it was fun. Doctor Grordbort’s Contrapulatronic Dingus Directory

was a major inspiration here, as were the Spaceman Spiff comics from Calvin & Hobbes. (Back in college I had a dream of making a Spaceman Spiff Sourcebook with a description and photocopied comic panel for every planet, spaceship, alien, and weapon that Spaceman Spiff ever encountered. I never got around to it, but I still think it would be fun to charge up my frap ray blaster and give it a go.)

I made the instruction cards in the aspect ratio of 2:3 so they’d work as 4×6 photo prints, and I added a little white gutter around each one because I have learned from bitter experience that photo printers often lose a little around the edges. The order is at the printer right now – I should be able to pick up the instruction cards later today, and package the turtles to ship out tomorrow or Monday.

Is this the end of the march of the Space Turtles at ES5-7? Maybe. I have a load of other things to be getting on with. But now I’m tempted to put in a Bricklink order and build some color-coordinated Reid-style turtles with the ‘right’ parts. If I ever do, the results will surely wind up here.

This entry was posted in Lego, Space Turtle. Bookmark the permalink.