Tales of the Flaming Vagabond

Or, How My Old Roleplaying Campaign Came to Influence (in a very minor way) Three of the Most Popular Science-Fictional Universes

I’ve blogged here a bit about Star Wars: The Roleplaying Game, which has been one of my favorite pastimes for almost two-thirds of my life, and which was my primary creative and recreational outlet between the ages of 16 and 21.

A story not previously told is how the campaign I started with my roommate in high school ended up leaving tiny footprints in the Whedonverse, and may have affected, in an even tinier way, the Star Wars universe itself.

I have long maintained that other  people’s roleplaying stories are strong contenders for the most boring of all narratives, so I’ll keep this brief. In my last two years of high school I was played a lot of SW:RPG with my best friend, Jarrod Davis. I think we both tried out a fair number of characters–at least I did. The ones that clicked were Kantar Kallark, my Karkadian pilot (my sketch, above), and Biltrex Karkhon, Jarrod’s human mercenary and smuggler (Jarrod’s drawing, below). Apparently we were really into the letter ‘k’. We officially teamed up and for a year or so (in both real and game time) we operated a Ghtroc 720 light freighter, the Exostar. 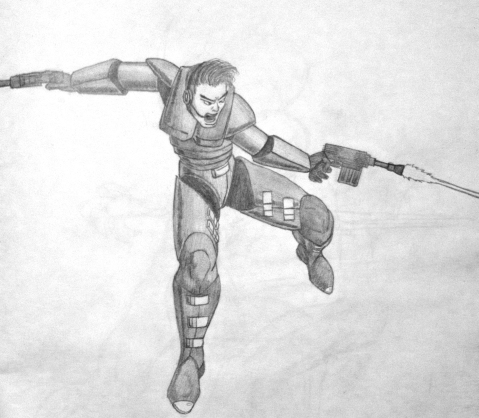 I honestly don’t remember what happened to the Exostar–this was 20 years ago. Presumably we sold it or it crashed. Whatever happened, we found ourselves with a nice pile of credits, a need for a ship, and a yen to move up to something bigger. We found what we wanted in a comic book.

Here’s the first glimpse of Salla Zend’s Starlight Intruder, from the Dark Empire comics. Han, Leia, and Chewie hitch a ride to Byss with Salla and her partner, Shug Ninx.

Here’s another view. You can just make out that the front module is taller than long, and grades from an oval on the left side of the ship to two stacked circles (probably docking ports) on the right. Here’s another image from a different artist that clarifies the front end a bit: 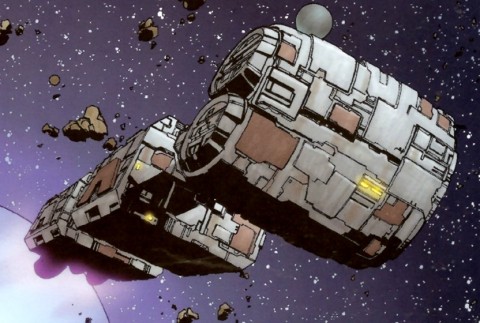 We were both quite taken with the Starlight Intruder. The Dark Empire Sourcebook provided dimensions, stats, and a model designation: Mobquet Medium Cargo Hauler.

I’ve Made a Few Special Modifications Myself

It is an article of faith with Star Wars roleplayers that ships are built to be modified, and that the famous named ships of the movies, comics, novels, and so on are not necessarily stock versions of their respective models. For example, the Millennium Falcon is a Corellian Engineering Corporation YT-1300, but there are other YT-1300 configurations out there. The two shown above are from Galaxy Guide 6: Tramp Freighters, which was our smugglers’ bible for most of our campaign (you can see more ships from that supplement here, and some more YT-series freighters here).

I bring this up because we liked the Starlight Intruder, but we wanted our ship to be a little different. In particular, we wanted a round hammerhead bridge section, more like the one on Princess Leia’s blockade runner (or CEC CR90 corvette, if you prefer). And I could not abide main engines that came out of the bottom of the tail section like hoses. Engines that aren’t aligned with the vessel’s center of mass give me the heebie-jeebies–I’m lookin’ at you, original starship Enterprise.* (Why this bothers me when most pop sci-fi ships ignore Newtonian mechanics anyway is admittedly irrational. Move along.) The engines on our ship would stick out the back, thank you. The drawing above is what we came up with.

* Yes, I have the technical manual, I know about the warp field explanation, I’m just not buying it!

The name of the ship was a deliberate homage to the Tales From the Floating Vagabond RPG, which I adored at the time and still think is pretty great–hell, the cover of the book  is trying to punch you in the face! Although I never actually ran TFFV, my Star Wars RPG games have always had more than a trace of TFFV’s gonzo spirit.

The Vagabond came into our campaign in 1992 or 1993, and it was our home base for several years–again, in both game-time and real-world time. We modified it over the course of those years–the final version, shown above, had capital-scale turbolasers on either side of the hammerhead, and a capital-scale missile launcher on top (the cylinders tacked onto the bottoms of the connector sections are supposed to be turbines to charge the turbolasers). Our characters eventually owned bigger ships and smaller ships, but the Vagabond was home–until it got blown up underneath us in an incident that I am still not sure if Jarrod has forgiven me for.

The RPG ship was history, but the Flaming Vagabond was destined to live again…

We Can Rebuild Her

Jarrod’s a digital effects artist. If you’re enough of a geek to be reading this, you’ve seen his stuff. There are nebulae in Star Trek: Voyager that started out as digital photos of the clouds over his apartment. The nuclear mushroom cloud over LA in season 6 of 24 was his work, too. He has an Emmy on his mantlepiece. (For a full list, see his IMDB page.) And sometime in the early 2000s, he made this digital model of the Vagabond.

Here’s how it compares to the Starlight Intruder and to my original drawing. The biggest change is the addition of the fans of steering engines around the main engine nozzles, which I think look pretty cool. If RPG-Vagabond still existed, I’d add those babies in a heartbeat.

Possibly my all-time favorite image of the Vagabond is this simple render-and-Photoshop job. As Jarrod was the first to point out, it’s not perfect (you can see the horizon going through the middle section, for example), but it has always been good enough to fool me into thinking, “Hey, cool, that’s our ship!”

Little did I know then that I’d be saying that a lot more.

In 2002 Jarrod worked on Firefly. And I mean, worked. All the effects guys busted their humps to make that show look great. Jarrod didn’t get a lot of sleep that year. Why would anyone want this lousy job? Well, because it was awesome, obviously, but also because it afforded him other interesting opportunities, like sneaking the Flaming Vagabond into the background of various shots: 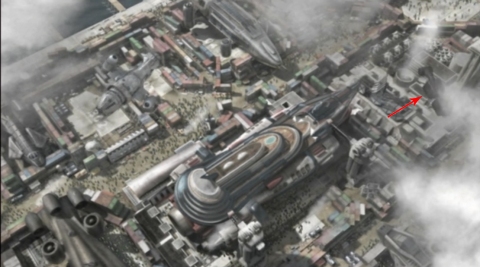 In the pilot, “Serenity”.

In “War Stories”, at Niska’s Station. This wasn’t actually Jarrod’s work, another animator put the Vagabond in there and had it flying backwards. That was fine with me–it reminded me of a great line from IIRC one of Brian Daley’s Han Solo books, where Han and Chewie are trying to figure out how to get into a heavily-defended facility, and Han says, “Maybe if we back in slow enough, they’ll think we’re leaving.” 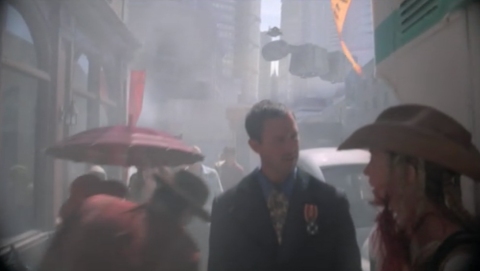 In “Shindig”, with landing gear extended.

…and in the opening sequence in the movie Serenity. I remember almost passing out in the theater when, not quite two minutes into what would turn out to be one of my favorite movies, I saw our ship flying by.

I Feel…a Disturbance in the Force

This did not go unnoticed. The appearances in Firefly are listed in the Wookieepedia entry on the Mobquet Medium Transport. And it is possible that Jarrod inspired someone on the Star Wars side to return the favor.

This rather familiar ship appeared in the background in the sixth strip of the Star Wars webcomic Evasive Action: Prey. It has been kinda-sorta canonized as the Firefly-class mid-bulk transport. Was this minor addition to the Star Wars universe inspired by the Flaming Vagabond? According to the Mobquet Medium Transport article:

The Mobquet Medium Transport is shown in the background of the episodes Serenity, Shindig, and War Stories of the show Firefly. As a response, the Star Wars artist Thomas Hodges made a similar move. See Firefly-class mid-bulk transport.

Whedon included a Star Wars ship, the Mobquet Medium Transport, in the background of the Firefly episodes Shindig and War Stories, and an Imperial shuttle in the pilot episode Serenity, so the cameo can be viewed as returning the favor.

Okay, first thing to understand is that Joss Whedon didn’t put any of the cameo ships in Firefly/Serenity (there are others, including an Imperial Lambda-class shuttle), and in fact he probably never knew they were there. Jarrod writes, “Joss was delightfully hands-off when it came to the bulk of the effects work, leaving it to the guys who live and breathe it 24/7. All those cameos were there because we, as geeks, wanted them to be. So we took every opportunity we could.”

Anyway, from this second entry it’s not clear if Hodges was inspired by the Vagabond or put a Firefly-class ship in Star Wars on his own steam, and people linked the two cameos later. Maybe someone who knows him can ask?

Still, I like to think that Flaming Vagabond inspired this little bit of sci-fi universe cross-pollination–even if it’s only true from a certain point of view.

I hadn’t thought about the Vagabond in ages until last week, when I watched Serenity with my 8-year-old for the first time. Writing this post sent me digging through boxes of old gaming stuff for drawings and stat sheets, and along the way I found the character sheets for Kantar and Biltrex. They’re still alive out there somewhere, we just haven’t visited them in a while. But Jarrod and I both have Skype now, and our kids are out of diapers, so who knows?

And I remembered that the Vagabond is only mostly dead. The Incident We Don’t Discuss blew up the back two-thirds of the ship, but the hammerhead bridge section survived along with Kantar and Biltrex, and is presumably sitting in some forgotten corner of their really big ship, the Ziggurat. After years of smuggling and privateering, Kantar and Biltrex are relatively wealthy, and the Vagabond was always a modified Mobquet Medium Cargo Hauler…

Thanks to alert reader Stefan Garcia (see his comment below), the Vagabond has now been spotted in Battlestar Galactica! More details here. And Jarrod relayed the story of how Serenity ended up in BSG, too–check it out!

This entry was posted in ID4, roleplaying, Star Wars. Bookmark the permalink.

15 Responses to Tales of the Flaming Vagabond